Samsung Galaxy S4 is surely great, but now all eyes are firmly locked on the Samsung Galaxy S5. For months, its rumors have been flying around, easing consumers with prospective Galaxy S5 launch date and release date, features. So, we want to take a look at what we expect from one of the biggest smartphone release dates of the year. 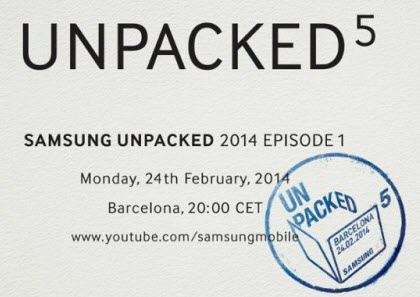 Samsung's official invite with title "Unpakced 5" is a hint that Galaxy S5 may launch on 24 February at MWC. The company has been teasing more via its @samsungmobile twitter account for Unpacked 5 event. The new icons shown in the tweet are for speed, outdoor, curiosity, fun, social, style, privacy, fitness and life. We can expect some features covering these topics at the event. The icons are all ending with the number 5 further hinting at the fact it'll be for the fifth Galaxy S handset.

Samsung tends to release its flagship Galaxy phones about a month after their unveil — so expect a Galaxy S5 release date around the end of March or beginning of April.

Updated: The Samsung Galaxy S5 will be available starting April 11 in 150 countries.

The Galaxy S5 will almost certainly be priced equivalently to the Galaxy S4 — though if manufacturing costs go up due to the higher-res screen and aluminum chassis, there could be a small price increase.

Updated: In the US, it'll come to AT&T, Sprint, T-Mobile, and Verizon Wireless; MetroPCS and U.S. Cellular. You'll also be able to pick it up at retail stores like Best Buy, Amazon, Costco, RadioShack, Sam's Club, Target, and Walmart. No word on pricing. All of us need to wait on pricing details, which carriers and retailers will release on their own.

We concentrate on a piece of software -- Android Data Recovery which can recover data from all Android phone on the market. We will update it to support Samsung Galaxy S5 as soon as possible after this phone is released. We will keep you updated then.