Android 6.0 M is announced as the sixth version of Android operating system in Google I/O developer conference in May 28. This article focuses on the Android 6.0 M release date, new features and supported devices.

Android 6.0 Muffin, as the next operating system of Android that arouses a hot discussion all over the world, has been announced in Google I/O developer conference. It is named Android M Developer Preview and it is now available for Nexus 5, Nexus 6, Nexus 9 and Nexus Player. There will be several beta versions before its final release in Q3, 2015.

The fist highlight of Android M is App permissions, which allows users to individually accept or deny any permissions upon request at any permissions at any later time, even legacy apps. Permissions will pop up the first time you use it, not at the point of installation. Android M is giving user greater control of the information, which is truly a positive improvement for Android.

Fingerprint canners will be embedded into the phones that run Android M. This feature allows fingerprint scanners to be used to unlock phones, make purchases shopping in real-time and finish payment within Play Store apps. To access this new feature, your device needs a hardware scanner equipped.

App links are changed in Android M so that it can know which app to open more intelligently. You have no need to face the "Open with" dialogue every time.

The better screen-off battery life of Android M is represented in two aspects: First, the usage of Doze. This function makes untouched devices become inactive. And the background tasks will wait longer to wake up. Second, app standby. The unused apps will lose network access. According to Google's test, it is claimed that the standby time of Android M device is two-times longer. 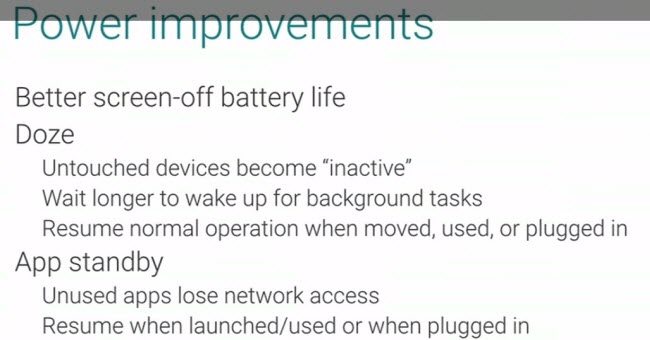 In Google I/O developer conference, Auto backup was introduced to the public as a new feature of Android M. But this function can only be used when your device is connected with wifi and power. All data will now backed up by default. If you lost your device, the app data will be restored the next time you install the app.

Six points are mentioned about this feature, including Coordinator Layout, Snackbar, Tab Layout, Navigation View, Textinput Layout and FAB. There are also other UI changes such as recyclerview item TouchHelper, and WebView.

The gestures around text selection have been improved, making it a little bit faster to choose things more accurately and more quickly. Another point is the floating palette with action items, which is more useful when you are using a large tablet device. 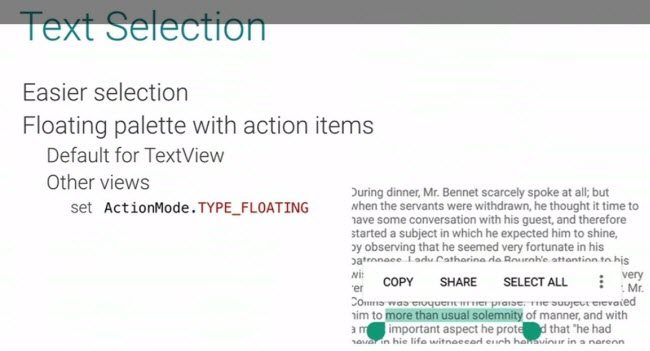 The M Android Developer Preview has been available for Google Nexus 5, Nexus 6, Nexus 9 and Nexus Player. Other models such as HTC One M9 and HTC One M9+ will also embrace the Android M update soon. We can also assume that Samsung Galaxy S6, S 6 Edge, Galaxy Note 4, Sony Xperia Z3, Z3+, Xperia Z4, LG G4, LG G3, and Motorola X/G/E will get the update soon.

The Ultimate Data Recovery Software for Your Android Phone.