Android 4.4 KitKat Launches on November 1: What to Expect 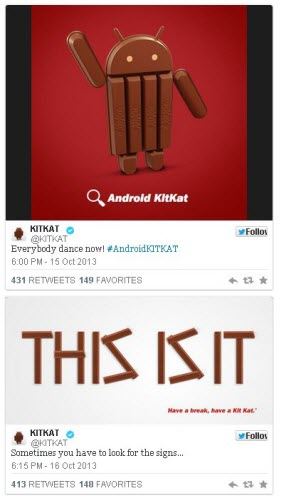 November 1st may be the release date of Android 4.4 KitKat. Nestle's @KitKat Twitter account has posted a Tweet with two musical references that suggest the OS could appear on this day. The first, "everybody dance now," clearly points to C+C Music Factory -- originally known as The 28th Street Crew. The second hint may be an allusion to Michael Jackson's This Is It movie, which reached stores on November 1st. If the latest rumours are to be believed, we're now only days from the launch.

Rumored UI changes include a revised color scheme, improved notifications and other general UI enhancements. Stock Android - the version which will ship on Nexus devices - looks better than ever. Of course, by the time it gets into the hands of Samsung, LG and Sony, it will look very different as those manufacturers slap on their own custom UI skins, but we're sure some of the excellent design work will shine through regardless.

Many handsets are stuck on Android 2.3 because of stern requirements made by subsequent updates. It is rumored that Android 4.4 have lower specification demands and can be installed on older phones and tablets. It's even been said that devices that missed out on 4.0 and beyond will be able to download 4.4.

Till now, the Android users have depended on third party apps such as Dropbox and Google Drive to store their data. Android 4.4 KitKat is likely to come with a cloud storage facility which will store and sync the data with the user's devices.

Android KitKat will also bring a better and responsive screen orientation and smoother transition eliminating the jerks, that were seen in the earlier versions. The screen orientation is expected to be smooth, fast and slick without screen distortion.

Google is clearly aware of bad reputation for general security -- Some malevolent on Google Play apps are serious cause for concern and made it easier to report malicious downloads.

KitKat is expected to ship with the Google Nexus 5 smartphone first, and then later come to other Nexus devices (like Nexus 4, Nexus 7 2013, and Nexus 10 devices, as well the previous generation Galaxy Nexus and Nexus 7 2012) via over-the-air updates.

It is suspected that newer and more popular models will get priority seating aboard the S.S. KitKat, like the LG G2 and HTC One.

Conclusion: Apart from Android 4.4 KitKat, Google will also be unveiling the hotly anticipated Nexus 5 and the new Nexus 10. It is said that users that use previous Android versions are likely to lose data on their devices. If this is the case, you can try Android Data Recovery which can recover contacts, photos, videos, text messages and call history on all Android phones and tablets. It supports Android 4.3 now and will be updated to support Android 4.4 as soon as possible after Android 4.4 is released.