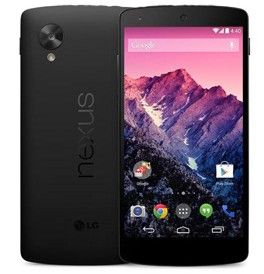 They are been leaked, teased and practically dissected for a while, but today Nexus 5 and Android 4.4 KitKat are finally here. Nexus 5, the latest "Pure Google" phone, developed in partnership with it LG, now is on sale on Google Play. Most importantly, this Google's flagship phone ships with a new version of Android KitKat, version 4.4, which brings cross-the-board memory improvements, a new full-screen mode, a smart dialer, and a refreshed home screen experience.

Display – the Nexus 5 is topped with a 5-inch 1080p LCD display. The display also boasts in-cell touch which we've come to expect this generation.

Camera - There's an 8 MP rear facing camera (no word on optical format or pixel size quite yet), but it does include the same LG Innotek module with OIS from the G2, it just has an 8 MP CMOS behind it.

Storage - Storage also moves up a notch to 16 and 32 GB options, no SD card supported.

Cellular Banding - Verizon's CDMA network is out of the question, but it is compatible with AT&T, Sprint, and T-Mobile LTE bands.

Starting today, the Nexus 5 is available for purchase on Google Play for $349 (16 GB) and $399 (32 GB) in either black or white in the US, Canada, France, Germany, Italy, Spain, U.K., Australia, Korea and Japan, followed by offline availability (non Google Play) in Europe, Central/South Americas, Asia, CIS and the Middle East will begin in mid-November.

"OK Google" commands and Google Now - It's quite cool that you can say "OK Google" to wake up your phone, start a search, take a photo and so on. Google Now will also find a place on your homescreen if you like.

Universal, integrated search - Now you'll be able to look up a number for a business or person directly from the phone dialler — searching across not just your contacts, but also Google Apps and nearby places.

Hangouts - Google announced this yesterday, and it means that Hangouts can be your go-to app for all of your instant messages, video calls and text messages. It support SMS, location sharing, and animated GIFs.

Less memory usage - "KitKat streamlines every major component to reduce memory use" the Android Developer site states. So, even old phones running KitKat should be faster and more responsive.

KitKat debuts today on the Nexus 5, which is on sale at the Google Play store. As for when it will land on existing Android devices, Google has said only that it will come to the Nexus 4, Nexus 7 Nexus 10 tablets, and the Samsung Galaxy S4 in the coming weeks. For its part, HTC has confirmed that all versions of the HTC One will get the update within 90 days (the HTC One Google Play edition will upgrade sooner) with the HTC One Max and One Mini following later.

More devices will get KitKat, as well, but we don't know when. Of course, we'll let you know as soon we learn about more update timelines.

By the way, Android Data Recovery is recommended for those who lost data on Android phone and tablets. The data it supports include contacts, photos, videos, call history and text messages. Now, it works with Android 4.3, and will be update to support Android 4.4 KitKat as soon as possible. We will let you know as soon as