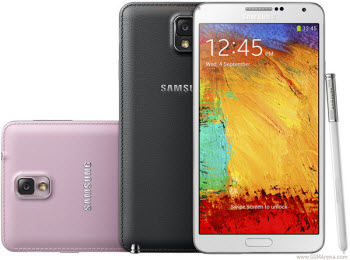 Samsung Galaxy Note 3, as expected, is larger, but slimmer, lighter, will replace Note 2 as the company's flagship large screen smartphone. The new flagship has expanded from 5.5 inches to 5.7 inches Super AMOLED display, with 3GB of RAM and a 2.3GHz quad-core processor. The increased screen doesn't come with a bigger body, in fact, with a slightly bigger battery than Note II, the Galaxy Note 3 is a couple of grams lighter than its predecessor. The camera has been improved as well, raised to 13 megapixels that can actually take 4K video. Plus, the new Note phone has a leather-like exterior with "premium look and feel" in three colors, jet black, classic white, and blush pink but consumers can choose optional covers in up to 10 colors. Also, Samsung will offer covers that leave a "window" in front showing part of the screen.

Along with the unveiling of the new Galaxy Note 3, the official release date has been confirmed. At September 25th, Samsung Galaxy Note 3 will be released in 149 countries, including America, though we haven't seen any carriers with exact plans for the device yet. The other countries that were not in this list will get Note 3 by October.

The Galaxy Note 3, according to Samsung, is been made "slimmer, lighter, faster, larger and better". Besides from the larger screen with a "warm, textured" design, the Note 3 has a new security system called Knox, which lets sensitive apps data run in a protected environment called the "container".

Generally speaking, software-wise, Samsung hasn't pay much attention on making new features, instead, they focused more on developing the existing features to make the overall user experience better. Like the signature feature of Galaxy Note 3, the S Pen stylus, has received the most changes. Taking out the pen from its hiding place will trigger feature called Air Command, which is a semi-circular menu that offers several options like Scrapbook, Action Memo, Screen Write, S Finder and Pen Window.

Also, there is a little feature called multi-window, which allows two different apps running onscreen simultaneously, now has been updated into allowing two windows from the same app running on one screen.

If you are using a Samsung Galaxy Note, or a Samsung phone that runs Android, when wanting to recover photos, contacts, videos or other files from your Samsung phone, please resort to Android Data Recovery, a powerful data recovery program that will make your recovery a piece of cake.