Based on Apple's surprise release of OS X 10.8 Mountain Lion in February 2012, many are expecting Apple to unveil OS X 10.9 within the next few weeks. It is likely that early builds of Apple's next Mac operating system include Siri and Maps integration, which are the most-used applications. 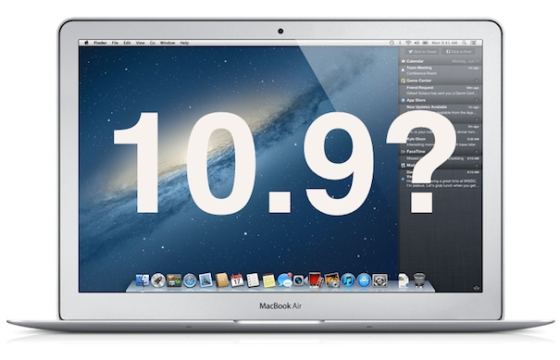 Since last year, we began seeing visits to 9to5mac.com (Apple news site) from OS X 10.9 computers. But recently, Apple has been updating its Jobs page with several new positions, including ones specifically built to help improve and expand the use of Siri.

Apple asks for an engineer that can implement "the content that appears within Siri's conversational view" but did not mention any experience in iOS in a recent job posting for a Siri UI engineer, added on January 24. It did, however, require collaboration with other Siri teams, as well as knowledge of Apple's development APIs and "familiarity with Unix, especially Mac OS X."

Additionally, over the past two weeks, Apple has added several new job postings related to both Siri and Maps, which add evidence to our guess that Apple is likely shifting gears now to put most of its energies behind Mac OS X 10.9, considering its release date is likely July. For the past several years, Apple has decided to upgrade OS X once a year, releasing the last two operating systems -- Lion and Mountain Lion -- in July, after releasing developer previews for both platforms in February. Apple is likely following a similar pattern, hence the increased traffic from Mac OS X 10.9 machines.

On the Mac, Maps integration may simply be a framework for developers to contribute their own work on mapping, but it's possible Apple may be building a standalone Maps app on the Mac, similar to how Google Earth is its own app outside of the Web. If Apple opened up its Maps application in the same way Google does, letting local residents and interested cartographers to submit their own improvements and details to help map the world, porting Maps to the Mac could be an excellent way to improve this service in a hurry.

Maps needs a lot of work before it can improve, but Mac users will likely welcome Siri, the friendly AI assistant useful for dictating your voice to send off texts and emails, set reminders and timers, play music, launch applications, or answer any number of context-sensitive questions about sports, movies and nearby restaurants and businesses.

However, Siri still leaves much to be desired. The feature only works with a stable Internet connection, which can be ridiculous at times, considering how many tasks can be handled locally, and the speech recognition software is still very imprecise. At the moment, it's a cute trick, but it's nothing Google can't do quicker and more efficiently on its own application.

At the moment, Macs can already perform Dictation, one of Siri's main features; however, adding Siri to the Mac only binds the iCloud ecosystem closer together, as Mail, Notes and Reminder are all accessible over Apple's mobile and desktop platforms.

Many Mac users are looking forward to seeing what new features Apple will bring to Mac OS X 10.9. Although some consider that computers and phones/tablets are at a point where there is little extra to add so the revolution everyone is always expecting rarely turns up. New features are always nice though.

Furthermore, if you lose data from your computer running Mac, you could just recover data from Mac using some data recovery program, for instance Card Data Recovery for Mac.